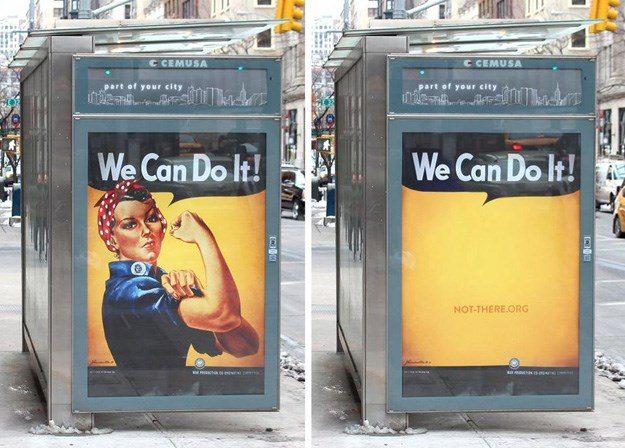 On International Women’s Day earlier this month, women disappeared across media, from the covers of magazines to billboards and posters.

Rosie the Riveter, the WWII icon of the American women workers, disappeared from her iconic poster in a bus shelter. Serena Williams faded from the Beats billboard in Times Square and Scarlett Johansson disappeared from a magazine cover. Vogue, Glamour and Allure magazines issues printed without women on their cover. Across the world, one might have observed some profile pictures that disappeared with a hashtag #NotThere over facebook and Twitter.

The Clinton Foundation, the institution behind this campaign along with media agencies, designated some existing advertisements, posters and other media to cut out women as part of a campaign to call attention to gender inequality. It was a symbolic gesture to say that when it comes to gender equality, we (men and women) are ‪#‎NotThere yet.

This act was also intended to drive online traffic to the No Ceilings initiative report on the status of women and girls across the globe.

The Clinton Foundation, founded by former President Bill Clinton, is also using online video, radio and social media to represent the idea that women are “not there” yet in terms of gender equality. Female celebrities, including Cameron Diaz and Amy Poehler, are featured in a video on the campaign’s website, Not-There.org, that explains the effort.

Many companies also participated in this purpose-driven marketing campaign. Along with the mass media company Condé Nast, the sports clothing and accessories company Under Armour and Beats, several other companies gave the Clinton foundation permission to replace their existing ads with modified ones, including the FMCG giant Unilever whose Dove brand in particular has a number of successful ad campaigns directed at women. The media space was donated or provided at a discount while the foundation covered the cost of printing the altered material.

[ This article was previously published in sabrinelaaouane.wordpress.com ] 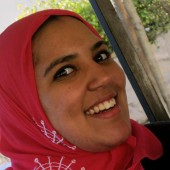 Innovation and technology enthusiast, currently living in Munich, exploring the culture of "Laptop and Lederhosen" where I moved in October 2015 to pursue higher education in Consumer Science with a focus on Innovation and Consumers. Former digital marketing manager for the tech companies Microsoft Mobile and Nokia. I am also working for Teach4Morocco, an NGO aims for quality education for all Moroccans. I also support initiatives related to women in STEM and refugees integration. I am a sports fan, and enjoy outdoors. I like to discover the world around me and I am always open to new challenges.